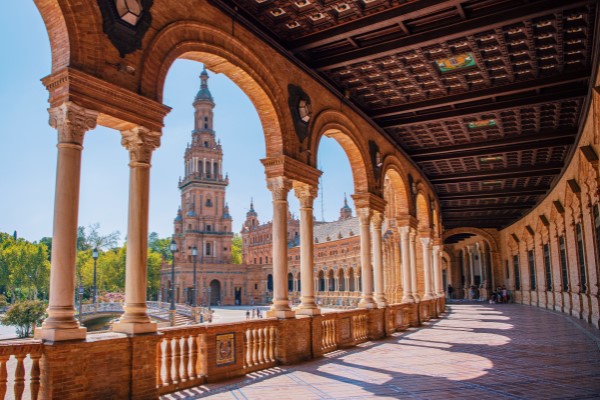 Departing Lisbon, settle in for a historical odyssey of Portuguese, Spanish, north African and Italian coastal gems on our 10-night journey Along the North African Coasts aboard our luxury ship. On this specially curated voyage you have time to roam North Africa´s most beguiling souks and medinas. From the French influences of Annaba to Oran´s complex past, Algeria is a land shaped by the many civilisations that ruled here. In Tunisia, explore the remains of the ancient city of Carthage. Conclude this intrepid journey in Sicily, a cultural melting pot offering up centuries of history of Middle Eastern, Northern African and European influences all melded together. 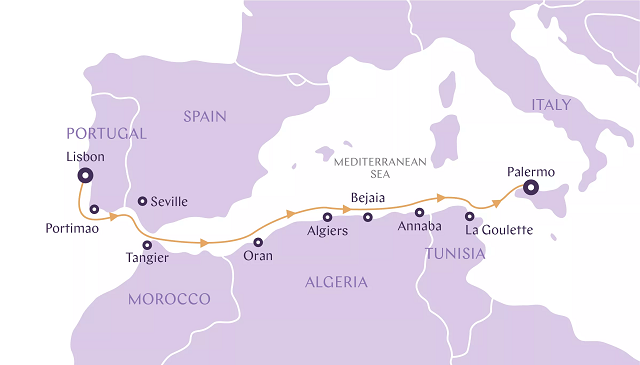 LISBON
DAY 1
One of the oldest cities in the world, Lisbon’s technicoloured past is evident just about everywhere. The medina-like streets of Alfama still bear Moorish influences. Baroque architecture surrounds you in Baixa and scars of the Great Lisbon Earthquake of 1755 can still be found throughout the city. It’s estimated that over 100,000 people died in what became one of history’s deadliest earthquakes. Today Lisbon is a delightful mix of colourful neighbourhoods, all brimming with history, culture and tradition. Baixa is where you’ll find the hustle and bustle, set below São Jorge Castle. Nearby Chiado is one of Lisbon’s trendiest neighbourhoods with its historic cafes and designer shops.


PORTIMAO
DAY 2
The Algarve’s second-most populous city dates back to the time of the Phoenicians. With golden sand beaches set beneath dramatic cliffs and the aroma of freshly cooked sardines drifting through the streets, Portimao is a wonderful spot for some downtime. Venture further into town for Praia da Rocha, one of the Algarve’s most beautiful beaches. Or head to Praia Grande, another stunning local beach - this one has its own 16th-century castle. Get your culture fix at the award-winning Museum de Portico. Housed in a 19th-century fish cannery, the museum displays local archaeological artefacts and intriguing underwater finds. There is also an interesting recreation of the former fish cannery.


SEVILLE
DAY 3 - 4
A city renowned for passion, culture and flamenco, Seville’s intoxicating atmosphere will infuse even the weariest traveller with a celebratory spirit. Dating back to Roman times, Seville has witnessed Muslim and subsequent Christian occupation. The magnificent Catedral de Sevilla lords over the historic centre, just a short distance from the Alcázar (palace), a royal complex of rooms and gardens hidden behind modest terracotta walls. Explore the birthplace of flamenco in the courtyards of the riverside district of Triana. Wander through the winding medieval lanes of the Santa Cruz Quarter, sampling the tapas bars as you go. Or simply watch the cheerful crowds over a drink in the buzzing plaza.


TANGIER
DAY 5
Founded by the Phoenicians 3,000 years ago, Tangier has a long, complex history thanks to its ideal trading position. Consequentially it has been fought over and occupied by many nations and civilisations. Today Tangier is a modern Moroccan city, however, until the mid-20th century, it was poorly governed by an international committee. The city fell into neglect and transformed into a haven for counterculture artists, musicians and writers including Henri Matisse, Paul Bowles, Jack Kerouac and the Rolling Stones. Contemporary Tangier has distanced itself from its dissonant past, now just another interesting aspect of its incredible history. Today the white city gleams with pride, with its buzzing café culture and modern port.


ORAN
DAY 6
Steeped in history, the port city of Oran, nicknamed ‘the radiant’, is Algeria’s second-largest city. Founded by Andalusian explorers, the Oran has since been influenced by Islamic, Haussmann and Spanish occupants. This complex legacy can be explored in The Palace of Culture, which houses exhibits detailing the city’s artistic and cultural past. A visit to Rosalcazar, a Spanish fortress perched above the city, offers an interesting insight into Oran’s succession of influences. The city’s church of Saint-Louis d’Oran is a fitting testament to its convoluted past. Since its construction, it has been a mosque, synagogue, church and cathedral.


ALGIERS
DAY 7
Algeria’s fascinating capital city is simultaneously battle-worn, beautiful and impressive. Founded by seafaring Phoenicians around the 4th century, the city later became a thriving Roman port. Ottoman rule arrived in the early 16th century followed by French occupation in 1830. Algeria gained its independence in 1962, and the influence of its many rulers and residents can be seen in the city’s rich and complex architecture. The Grande Poste is particularly impressive. Commissioned by the French in 1910, the neo-Moorish building features graceful arches and an elegant marble staircase. Standing in contrast to the historical architecture is the modern Martyrs Monument. The monument opened in 1982 and commemorates Algeria’s war of independence.


BEJAIA
DAY 8
Located on Algeria’s Mediterranean coastline, the city of Béjaïa is home to one of the largest Berber speaking populations in Algeria. The city was first founded by Numidian Berbers and was subsequently occupied by numerous conquering forces and empires including the Romans, Byzantines, Ottomans and the French before gaining its independence along with the rest of Algeria. The city’s tumultuous past can be explored in the fascinating Béjaïa Museum, and relics of its history remain throughout Béjaïa. Outside of the city, nature is beautiful and abundant. This can be appreciated in the nearby Gouraya National Park. Several protected species can be found here, including the endangered Barbary ape, wild cat and Algerian hedgehog.


ANNABA
DAY 9
Known as Bône during the French occupation, modern-day Is Annaba is Algeria’s third-largest city. Located less than 100 kilometres from the Tunisian border, the port town exhibits a particularly European ambience, thanks to its strong French heritage. From the Parsian-esque nightlife along the Cours de la Revolution to the striking Basilica of Augustine, reminiscent of Paris’ Sacre Coeur, French influence is alive and well here. The nearby War Cemetery is an important memorial to the British Empire’s soldiers and airmen who fought in the region during World War II. And further afield El Kala National Park, a recognised UNESCO Biosphere Reserve, is home to an impressive population of endemic flora and fauna.


LA GOULETTE
DAY 10
La Goulette port is the gateway to Tunisia’s capital city and cultural hub, Tunis. Tunis is said to date back as far as the second millennium BC. The city has been subject to many occupying influences over the years which is evident in its modern-day society. Parisian style café culture dominates the main boulevard whilst in the Medina of Tunis, many continue their ancestor’s traditional way of life. Just beyond Tunis lies the ancient city of Carthage. This once-powerful city lay at the centre of the Phoenician trade network. It grew to be the richest city in the Mediterranean before being burned to the ground by the Roman Empire in the wake of the Punic Wars. Julius Caesar later re-established Carthage as a Roman colony, and after several decades it became one of Rome’s most important colonies. The ruins can be explored on a visit to UNESCO-listed Carthage Archaeological Park.


PALERMO
DAY 11
A feast for the senses, Sicily’s capital is an intoxicating and chaotic melting pot. Bustling street markets, ancient buildings, opulent palaces and millennia of history await those ready to embrace Palmero for all that it offers. Palmero’s history is complex, to say the least. Middle Eastern, Northern African and European influences are all melded together here. The Greeks, Romans, Carthaginians, Arabs, Goths and Vandals have come and gone through the ages, leaving countless treasures in their wake. The 12th-century Arab-Norman cathedral, built over a 9th-century mosque, houses the tombs of the Norman rulers and is a fitting manifestation of the city’s convoluted past. The opulent Palazzo de Normanni, once the seat of power for the kings of Sicily during Norman rule, is a dazzling display of the opulence that the city’s rulers once enjoyed.

The 2023-built SH Diana will be providing elegant and spacious 5-star accommodation for 192 guests in 96 spacious staterooms and suites, the vast majority with large balconies. 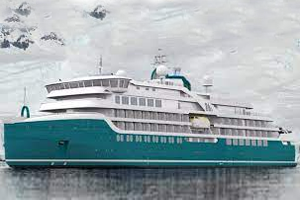 
﻿
Contact Cruise Norway for the best rates.
Thousands of customers served since 1999. We find you the best value and provide exclusive deals at discounted rates.