On this extraordinary 22-day voyage, follow in the wake of courageous explorer Sir Ernest Shackleton to Antarctica and the South Shetlands before heading via Antarctic Sound and Weddell Sea to South Georgia and Falkland Islands.

Departing Ushuaia in Argentina, we cross the mighty Drake Passage en-route for the South Shetland Islands, making Zodiac landings at penguin rookeries, research stations and fascinating lookouts along the way. Continuing southward, we will explore the Antarctic Sound with its mighty tabular icebergs and enter the Weddell Sea in search for wildlife. 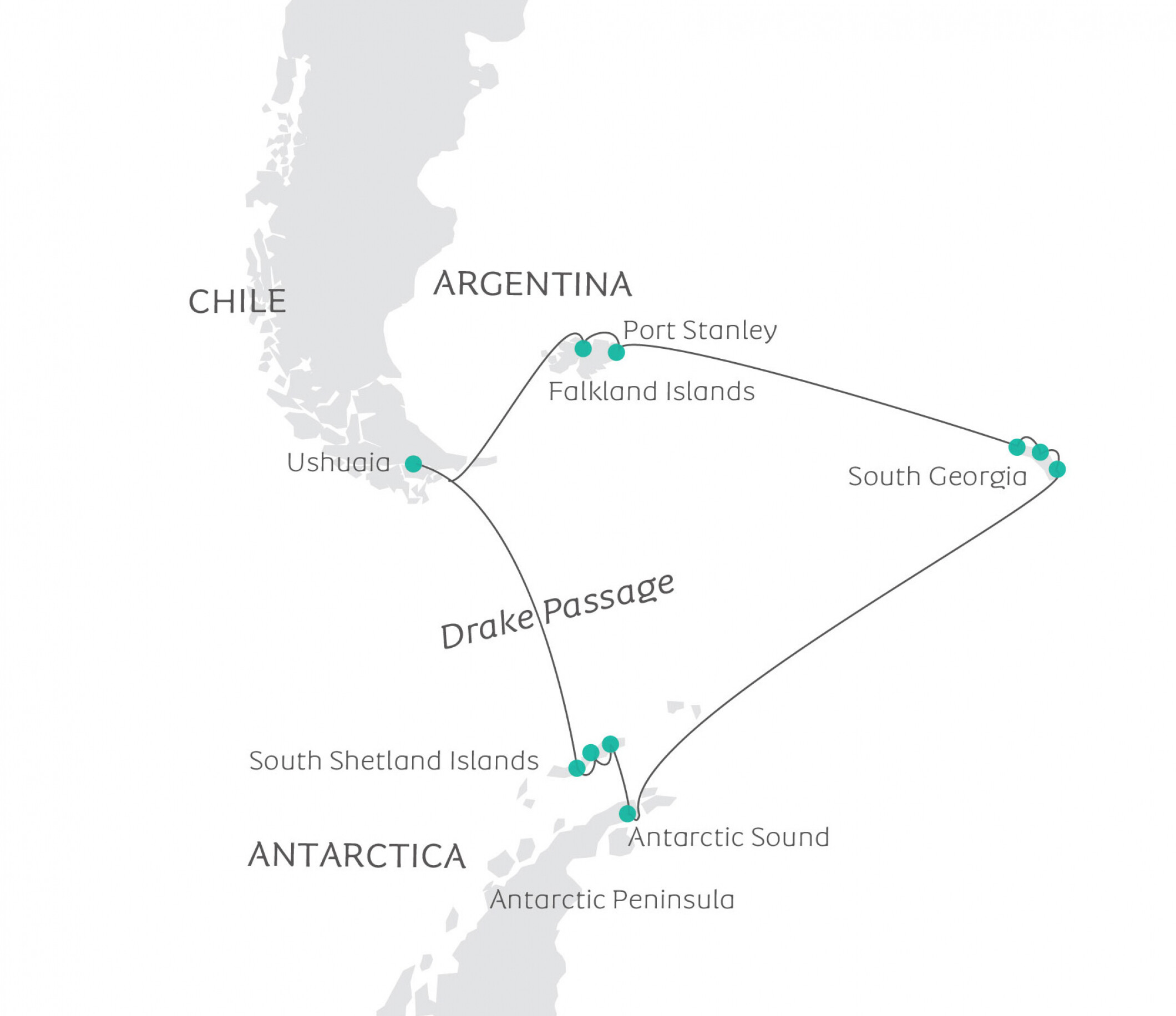 Sailing onwards between Elephant Island and South Georgia offers a small glimpse into the passage made famous by Shackleton 100 years ago, when he navigated the 1300 km course through open seas of Drake Passage in an effort to save his stranded crew. South Georgia is one of World’s greatest natural wonders. Wildlife-packed beaches, active research stations, former whaling stations and a visit to Shackleton’s final resting place are on our agenda.

On our last leg towards back to Ushuaia in Argentina, we will pay a visit to the fascinating Falklands. Port Stanley with its quaint English architecture will be our first call before venturing further west for Zodiac landings and wildlife observations on pristine and sheltered beaches.

After leaving Falklands, the last seadays can be spend bird watching from top deck and attending lectures, work shops and photo re-caps in one of our vessel’s lounges.

DAY 1 ARRIVAL AND EMBARKATION IN USHUAIA.
Arrive and embark in Ushuaia, Argentina – the world’s southernmost town. Explore the quaint city or local countryside. Alternatively, consider a day trip off the beaten path to the raw, natural archipelago of Tierra del Fuego. It’s a hiker’s paradise with rugged snow-capped mountains, glaciers, flower-filled meadows and boggy quagmires. In the afternoon, we board our ship, (Ocean Atlantic / Ocean Victory – see departure dates).

Our journey begins as we navigate through the calms of Beagle Channel, a strait in the Tierra del Fuego Archipelago.

DAYS 2-3 AT SEA. DRAKE PASSAGE, KING GEORGE ISLAND
Sailing onward, we cross the famed Drake Passage – a body of water that marks the intersection of the cold Antarctic with the warmer Atlantic and Pacific Oceans. Drake Passage is known for strong westerly winds, heavy sea, and its nickname ‘The Roaring Fifties’. While this passage may be challenging, you can rest confidently aboard our expedition vessel, which is purpose-built with stabilizers, powerful engines and a highly qualified crew. The most spirited sailors consider Drake Passage a lifetime achievement – and soon you can tick it off on the list yourself!

In the Drake, the excitement builds as Antarctic wildlife comes into view with our first sight of seals, penguins and albatrosses.

Having crossed the Drake, we will explore the sub-Antarctic islands of the South Shetland chain and be marveled by the captivating landscapes we will encounter along the way. Weather permitting, we hope to make our first landfall on King George Island before continuing further south to the tip of the Antarctic Peninsula.

DAYS 4-6 ANTARCTIC SOUND AND WEDDELL SEA
Over the coming days, we will begin the exciting Antarctic experience at the very tip of the Continent. During these days in the Antarctic Sound, named in 1902 after the Swedish vessel Antarctic, the Captain and the Expedition Team will keep a watchful eye on the mighty tabular icebergs, born from the floating Larsen Ice Shelf further south. We aim to have both continental and island landings on the shores of Antarctic Sound and Weddell Sea, always on the lookout for some of the unusually large penguin colonies, which have recently been observed.

The itinerary and activities over the next few days depend on weather and ice conditions. The route and shore landings will be determined by the Captain and Expedition Leader and communicated to the guests through regularly scheduled briefings.

DAYS 7-12 DRAKE PASSAGE AND SOUTH GEORGIA
From the Weddell Sea we continue our journey into the open sea, just as Ernest Shackleton and his men did more than hundred years ago. Having lost their ship Endurance deep south in the Weddell Sea they moved slowly north on ice floes and later in open lifeboats until they reached Elephant Island. From here started one of the most remarkable boat journeys in the polar history, when Shackleton and five of his men for two weeks navigated the 720 nautical miles to South Georgia to call for recovery of the stranded crew on Elephant Island. After passing Elephant Island at close distance we on the other hand will reach the mighty South Georgia after just a few days at sea!

South Georgia offers stunning wildlife experiences with a wealth of breeding penguins, sea birds, sea lions and seals, all seeking shelter in this oasis amidst the roaring Southern Ocean. Previous whaling history pops up in most of fjords we will explorer – not least in Grytviken the only inhabited settlement on this mountainous island. Grytviken is also the last resting place for Ernest Shackleton, after he died on yet another Antarctica voyage in 1922. We will explorer the fjords of the north coast for 2-3 days and take as many shore landings as time and the swelling sea will allow us.

DAYS 13-14 SOUTH ATLANTIC, APPROACHING FALKLAND ISLANDS
Days at sea are great for participating in lectures, photo sessions and recaps, reading books in the ship library and watching the ubiquitous storm petrels and albatrosses from top deck. Or just to relax.

DAYS 15-16 PORT STANLEY AND FALKLAND ISLANDS
During the morning we approach Falkland Islands and in the early afternoon Ocean Atlantic will cast anchor the sheltered natural harbor of Port Stanley. Utilizing our Zodiacs, we will land in town center, and take a leisurely stroll through the streets of Stanley.

On the following day we will make landings – weather permitting – at two of the islands’ many magnificent wildlife spots.

DAYS 17-18 AT SEA TOWARD SOUTH AMERICA. USHUAIA AND DISIMBARKATION
We are now into the last leg of this adventurous voyage, heading back towards Ushuaia.

After a hearty farewell to vessel and crew, we disembark in the morning after breakfast.

Ocean Atlantic is the perfect vessel for expedition cruising in Antarctic waters! Newly renovated in 2016 and with an international ice class rating of 1B, she is one of the strongest ships operating in Antarctica. Her high maneuverability, shallow draft and strong engines allow for extended voyages into isolated fjords, creating exciting adventures for any Antarctica traveler.

Ocean Atlantic is newly renovated (2016) with elegant common areas and accommodation for 198 passengers.
The ship was built in 1985 and underwent an extensive rebuild in 2010. With a length of 140m she has ample space on the multiple decks for several lecture halls, a relaxed restaurant serving 4-star international cuisine, professionally staffed bars and observation platforms – and even a pool.

All common areas on the Erickson Deck feature large panel windows, enabling passengers to quickly spot passing whales and photographic sights from the comfort of indoor lounges.
All private cabins are stylish appointed and feature individual bathroom facilities, phone for internal calls, individual temperature controls and TV. Ideal for relaxation, the vessels’ accommodation ranges in size from 11 – 35 m2 and are designed with either portholes or windows.

Daily shore landings at penguin rookeries, research stations and other Antarctic wonders are made possible by her fleet of 20 Zodiacs. 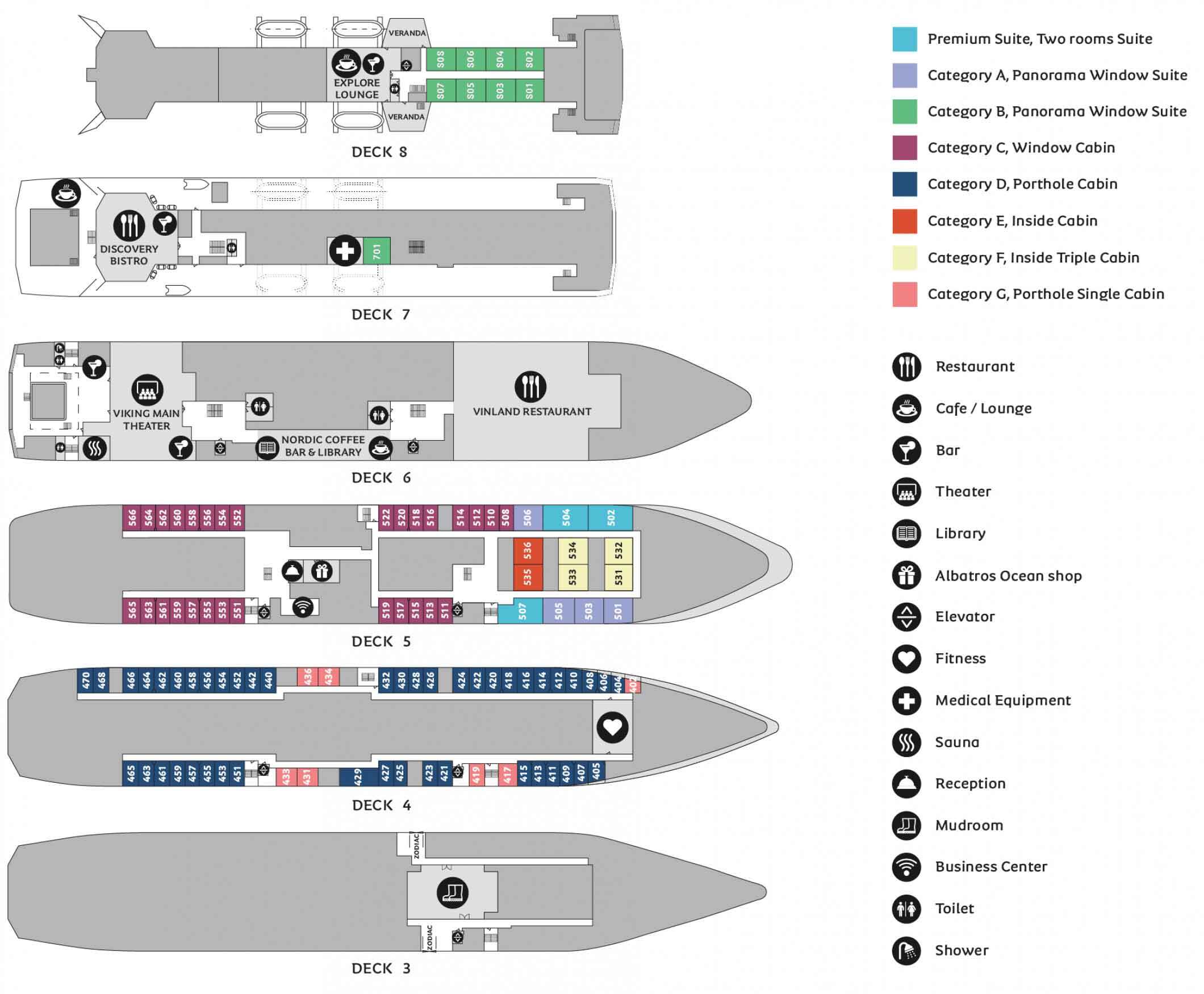 Extra excursions and activities not mentioned in the itinerary
Single room supplement and cabin upgrades
Meals not on board the ship
Beverages (other than coffee and tea)
Tips for the crew (we recommend USD 13.5 per person per day)
Personal expenses
Anything not mentioned under ’Inclusions’