This Arctic expedition is one of a kind! We will sail above 80° N, to take you to the ice edge of the Arctic Ocean while circumnavigating Svalbard. Enjoy excursions including hiking, kayaking and traversing a glacier. In the largest Arctic wilderness in Europe, there’s a good chance to see polar bears. 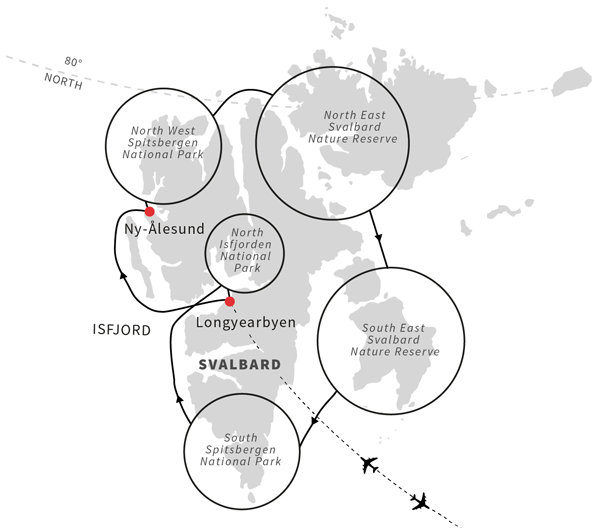 With more polar bears than people, Svalbard provides an excellent chance to see these magnificent predators This expedition is one of a kind, with a multitude of landing sites and exciting experiences in the Arctic. We will sail above 80º N, to take you to the ice edge of the Arctic Ocean. The adventure will include several excursions including hiking, kayaking, and other activities on land and on the water. There’s also a good chance that we’ll see a polar bear – after all, there are more polar bears than there are humans on Svalbard.

Highlights of the Arctic
Starting in Longyearbyen, we sail well above the 80th parallel and place you closer than 600 nautical miles from the Geographical North Pole. Explore the great national parks and some of the most spectacular highlights of the Arctic. One might expect it to be unbearably cold this far north. However, thanks to the Gulf Stream, the Svalbard archipelago boasts a surprisingly mild climate in summer. Among a large variety of plants and wildlife are seals, thousands of seabirds, the Arctic fox and reindeer and the top predator: the polar bear.

Deep fjords, mighty glaciers and pure wilderness
In the summer, beautiful colours and contrasts provide the frames for dramatic glaciers, majestic mountain formations, deep fjords, buzzing bird cliffs and endless arctic tundra with its diverse flora and fauna. The midnight sun makes it possible to fill your days and nights with experiences. 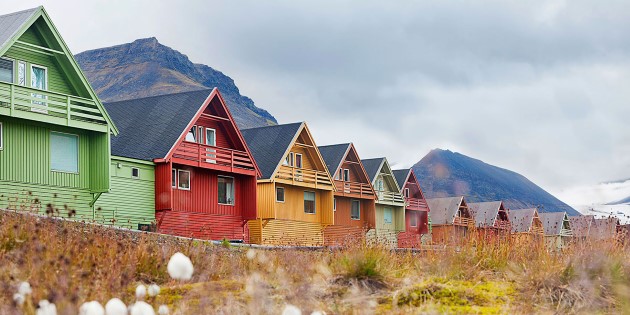 This Arctic Circumnavigation starts with an evening flight from Oslo. Norway’s capital is often called ‘the blue, the green and the city in between’ because of its idyllic setting, nestled between fjord and forest. Spend a day checking out the museums, parks and intriguing architecture, or relax in one of the many cafés or bars.

Then, set foot in an entirely different world when you arrive in Longyearbyen after your flight. This tiny town perched on the edge of the Arctic wilderness is surprisingly cosmopolitan, with first-class facilities, charming architecture, an internationally renowned museum and several bars and restaurants.

The Norwegian Stronghold in the High Arctic

After an overnight stay in one of our hotels, you can join an exciting excursion to get to know this unique town and the surrounding area. The mighty Arctic wilderness dominates life here, but the town maintains a lively cultural life in spite of its remote position. Longyearbyen is often called an antidote to modern-day life and serves as a prime destination for adventure travelers. Enjoy the singular atmosphere of this colourful frontier outpost before boarding your ship. 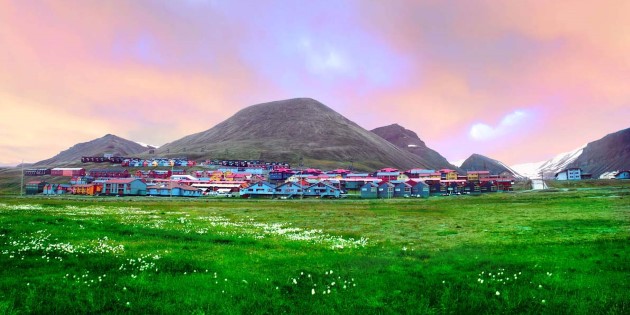 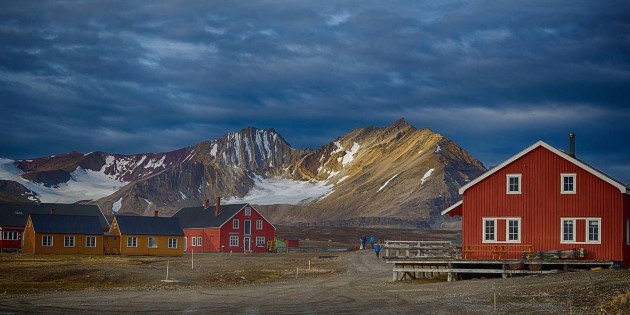 The North West Corner is scattered with islands, fjords and beaches. The ocean here can be full of drifting ice especially in the early season and the frozen landscape changes constantly. Due to strong winds and currents, the Captain monitors conditions closely before deciding where we can land or sail. This is why all our itineraries are flexible; we work with the elements, not against them, and safety is our first priority. If we are able to land, this area is excellent for exploring Svalbard’s history. You will have the chance to see the remnants of ancient blubber ovens used to render whale oil.

We might visit Kongsfjorden, considered one of the most beautiful fjord areas in Spitsbergen, with mighty glaciers calving icebergs into the sea, framed by stunning mountain formations. On the shore of Kongfjorden is the former mining settlement of Ny-Ålesund, now an international center for research, with a picturesque mix of old and new buildings.

In the Magdalenafjorden and Gravneset areas, you may have the chance to actually swim and earn a rare Arctic swimming certificate. There will also be exciting hiking and scenic kayaking opportunities, featuring the nearby Gully Glacier.

We may also get to see the enormous Monaco Glacier in Liefdefjord, and enjoy a chance to cruise in small boats.

Enjoy Expedition Days in the Arctic

If conditions allow, we will to sail to Isflakbukta on Phippsøya, part of Sjuøyane (Seven Islands), which are located at the far north of the Svalbard archipelago. Thousands upon thousands of seabirds mate here, while walrus dive for clams in the bays.

We also aim to cruise in Sorgfjorden, which borders the North East Spitsbergen Nature Reserve, and was the site of a famous 17th-century battle between whalers. If the weather is favorable here, we can hike in beautiful Eolsneset or enjoy tender boat cruising in the Hinlopen Strait area.

Another part of our journey may be a visit to Torellneset, which is an excellent place to spot walruses sunning themselves on the flat beach.

We continue on to Edgeøya, the third-largest island in the Svalbard archipelago. On its western shores, the landscape is largely un-glaciated, unlike most other places on the east side of Spitsbergen. Kapp Lee is a wonderful site where you will find cultural heritage from all eras of human exploration of Svalbard.

We make our way to the southern cape and the southernmost tip of Spitsbergen, where Hornsund hosts a wonderfully varied landscape and geology. Ice being pushed into the fjord early in the season attracts polar bears that hunt on the floes, so with a bit of luck, we may spot some of these magnificent predators. 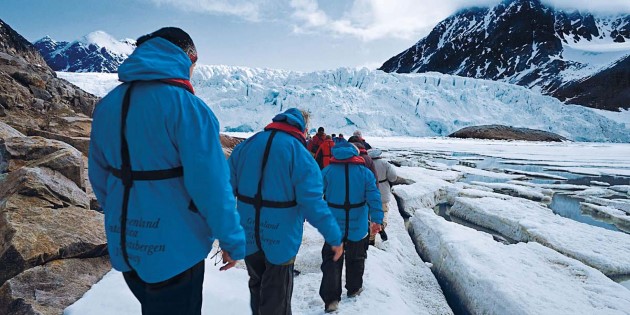 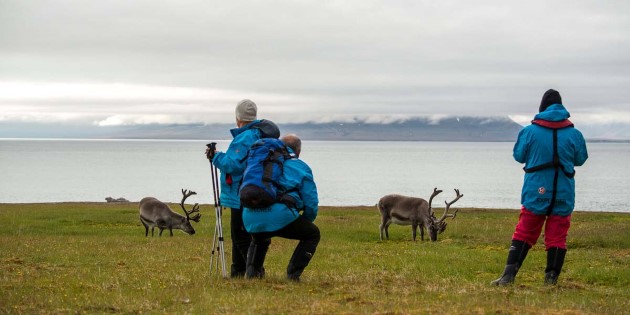 We will spend the day exploring the Isfjord, the most prominent fjord system on Svalbard. In the inner parts of Isfjorden, the landscape changes constantly. The immense U-shaped valleys, carved out of the mountains by the giant glaciers that covered the area some ten thousand years ago, are home to large populations of Svalbard Reindeer.

End of the Expedition

Every good explorer’s voyage comes to an end. You will probably sense that time has passed faster than expected. Many report a subtle exhilaration due to having taken a journey to the very top of the globe, just a few hundred miles from the Geographical North Pole. The transfer vehicle takes you early in the morning to the airport for your flight back to Oslo. 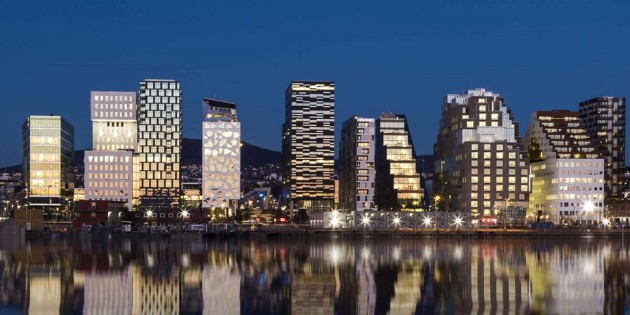 2021 Circumnavigating Spitsbergen – In the Realm of the Polar Bear

USD $7874 USD $6101
Remote, mysterious, extreme and located on the southern fringe of the frozen Arctic Ocean, Spitsbergen is a land forged by ice, wind and sea.
10 Days
Svalbard

USD $8071 USD $6535
This Arctic expedition is one of a kind! We will sail above 80° N, to take you to the ice edge of the Arctic Ocean while circumnavigating Svalbard.
10 Days
Svalbard