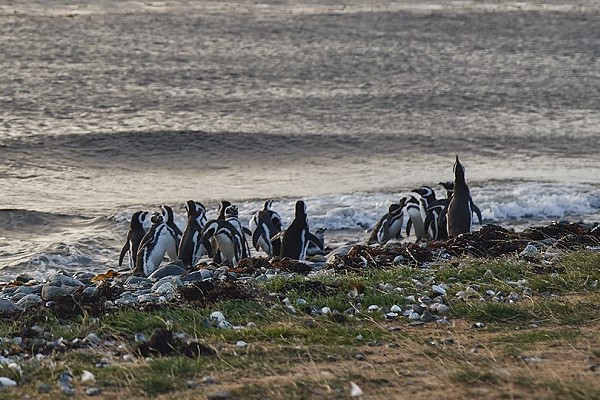 A unique itinerary visiting the iconic and exclusive places of Patagonia. Without landings in other ports or cities, safely enjoy a unique exploration through virgin and uninhabited fjords and bays. The premium-all Inclusive service is provided - adapted to the new conditions required to travel with peace of mind.

INCLUDED IN THE PRICE! 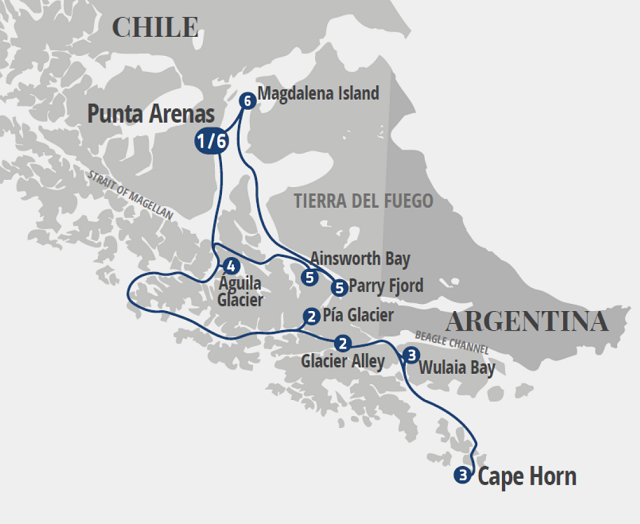 Punta Arenas
Check in at 1398 Costanera del Estrecho Ave. (Arturo Prat Port) between 13:00 and 17:00. Board at 18:00. After a welcoming toast and introduction of captain and crew, the ship departs for one of the remotest corners of planet Earth. During the night we cross the Strait of Magellan and enter the labyrinth of channels that define the southern extreme of Patagonian. The twinkling lights of Punta Arenas gradually fade into the distance as we enter the Whiteside Canal between Darwin Island and Isla Grande de Tierra del Fuego.

Pia Glacier - Glacier Alley
By morning we are entering Pia Fjord and boarding the Zodiacs for a shore excursion to Pia Glacier. After disembarking we take a short hike to gain a panoramic view of the spectacular glacier, which extends from the mountaintops down to the sea or a longer much more difficult walk up a lateral moraine of the old Pia Glacier. Back onboard Ventus Australis, we continue east along th Beagle Channel through an area called Glacier Alley. Living up to its name, the passage features a number of impressive tidewater glaciers flowing down from the Darwin Mountains and Darwin Ice Sheet on the north shore

Cape Horn - Wulaia Bay
By early morning, the ship is cruising across Nassau Bay into the remote archipelago that includes Cape Horn National Park. Weather and sea conditions permitting, we shall go ashore on the windswept island that harbors legendary Cape Horn (Cabo de Hornos). Discovered in 1616 by a Dutch maritime expedition - and named after the town of Hoorn in West Friesland - Cape Horn is a sheer 425-meter (1,394-foot) high rocky promontory overlooking the turbulent waters of the Drake Passage. For many years it was the only navigation route between the Pacific and Atlantic, and was often referred to as the « nd of the Earth.» The park was declared a World Biosphere Reserve by UNESCO in 2005. Sailing back across Nassau Bay, we anchor at fabled Wulaia Bay, one of the few places in the archipelago where the human history is just as compelling as the natural environment. Originally the site of one of the region’s largest Y mana aboriginal settlements, the bay was described by Charles Darwin and sketched by Captain FitzRoy in the 1830s during their voyages on the HMS Beagle.

Aguila Glacier
Early in the morning, we will sail through the Cockburn Channel and enter Agostini Sound. From there it is possible to see the glaciers that descend from the middle of the Darwin Mountain Range - some of them reaching the water. This morning, we will disembark and go for an easy walk around a lagoon, which was formed by the melting of the Aguila Glacier. We will reach a spot right in front of that glacier with stunning views. In the afternoon, we will approach the Condor Glacier via Zodiac - and hopefully see some of the abundant Andean Condors in the area.
Parry Fjord - Ainsworth Bay
At dawn we will navigate Parry Fjord. From this area it will be possible to appreciate various glaciers that come down to the sea from the upper icefield. Onboard Zodiac boats, we will motor to the far end of the fjord to see an amphitheatre of glaciers in an area where sometimes it is possible to see leopard seals. In the afternoon, we will navigate our way through Almirantazgo Sound, arriving at Ainsworth Bay which is sited within Alberto De Agostini National Park. It’s the perfect spot from which to see the Marinelli Glacier descending from Darwin Mountain Range in the distance; and to appreciate how the land returns to life after glacial retreat. We will also take a walk to a beaver dam in the stunning sub-polar Magellan Forest. Whether on the beach or the island, there’s sometimes a chance of sighting Southern Elephant Seals.
Magdalena Island - Punta Arenas
After an overnight cruise through Magdalena Channel and back into the Strait of Magellan, we anchor off Magdalena Island, which lies about halfway between Tierra del Fuego and the Chilean mainland. Crowned by a distinctive lighthouse, the island used to be an essential source of supplies for navigators and explorers and is inhabited by an immense colony of Magellanic penguins. At the break of dawn, weather permitting, we go ashore and hike a path that leads through thousands of penguins to a small museum lodged inside the vintage 1902 lighthouse. Many other bird species are also found on the island. After a short cruise south along the strait, disembarkation at Punta Arenas is scheduled for around 12:15 PM.

NOTE: It is generally possible to carry out the expeditions described in the itineraries. However, the company reserves the right to alter, change or omit parts of these routes without prior notice, in order to preserve the well-being and safety of passengers, protect the environment or for any extraordinary circumstances, force majeure or accident, requiring them to make such changes. For the same reasons, there may be possible changes in the departure or arrival of boats. Similarly, it is impossible to guarantee the observation of birds and animals because of their permanent movement.

Ventus Australis is tailor-made for exploring the remote southern tip of South America. All aspects of the 210-passenger ship are designed to give Ventus Australis the extreme maneuverability necessary to navigate narrow fjords and channels where no other cruise ships can venture. Its size, length, draft and engine power, all contribute to making it extremely suited to this kind of exploration. 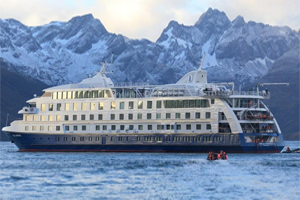 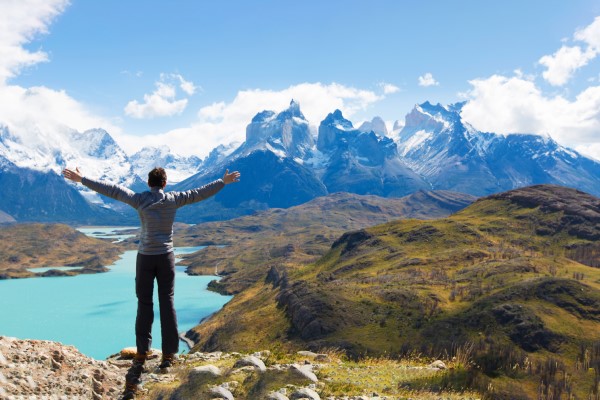 * Rates are listed per person in USD


DISCLAIMER: Rates are per person and subject to change.