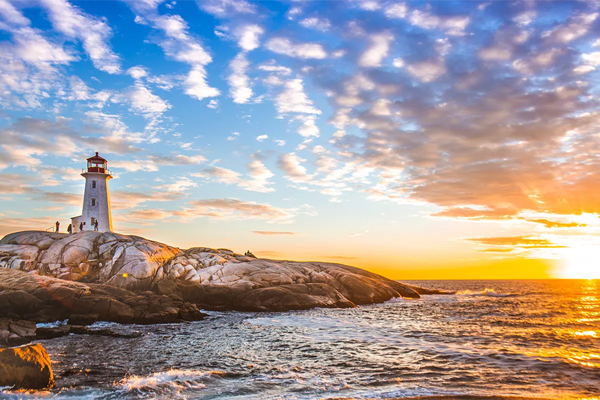 America's Historic Cities Of The Sea - Halifax To Miami 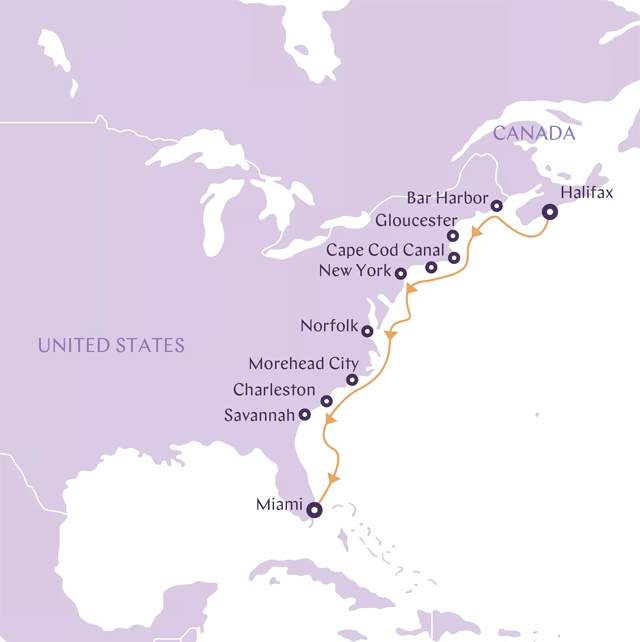 Day 1: Halifax Nova Scotia's lively capital is rich in nautical history and charm. Its seafaring stories can be discovered in the maritime museums, fortresses and bunkers that are peppered throughout the city. There is also an interesting counterculture contingent here, with striking public art and quirky shops on every other corner. Halifax is also home to plenty of fantastic seafood options, from street vendors to fine dining restaurants. The surrounding shorelines are beautiful and also worth exploring. Peggy's Cove, with its picturesque lighthouse, is a favourite spot. Day 2: Bar Harbor A quintessential New England coastal town, Bar Harbor is scenic, walkable and surrounded by Acadia National Park, a stunning national treasure. The park is characterised by its breathtaking views of jagged coastlines and pristine lakes. Its also home to Cadillac Mountain, the highest point on the US Atlantic coast. Hike or bike along the shores of Acadia's lakes and dramatic coastline. Or visit the Wild Gardens of Acadia, which currently showcase over 300 native plant species. Day 3: Gloucester, Massachusetts This old Massachusetts fishing port was one of the state's first settlements. The town is a wonderful spot for whale watching and has an impressive collection of shops and restaurants. Gloucester is an ideal gateway to nearby Boston. Spend the day exploring the city's iconic sights including the Freedom Trail and Beacon Hill. Nearby Salem and Rockport also offer fascinating days out with excellent museums and restaurants. Day 4: Newport, Rhode Island Once a playground for 19th-century wealthy New Yorkers, Newport's cliff-top palatial mansions are no less impressive today. These summer homes of the Gilded Age belonged to the likes of the Astors, Rockefellers and Vanderbilts. Styled on Italianate palazzi, French châteaux and Elizabethan manor houses, these respectfully restored properties showcase the variety and extravagance of the era. Also known as the ‘sailing capital of the world', Newport Harbor is lined with yachts and boats of all shapes and sizes. Step aboard a restored lobster vessel or a former rum-smuggling boat to experience Newport's diverse maritime history first-hand. Day 5: New York City, New York This morning we'll sail past the Statue of Liberty and around the southern tip of Manhattan on our approach to the Big Apple. We have a full day to uncover one of the world's most vibrant and exciting cities. Visit New York's most renowned sites including Battery Park, the Alexander Hamilton U.S. Custom House, Fraunces Tavern, Wall Street and the New York Stock Exchange. Art lovers won't want to miss the Metropolitan Museum of Art or the Museum of Modern Art. And romantics might enjoy a stroll across the iconic Brooklyn Bridge followed by a Broadway show. Day 6: At Sea Spend your day at sea enjoying your boutique 5-star ship. Treat yourself to a spa day, attend an expert-led onboard lecture or enjoy the ocean views from the deck or the comfort of our Observation Lounge. Day 7: Norfolk & Colonial Williamsburg, Virginia Lovely Norfolk is home to the world's largest naval base, a busy international port and some well-preserved historic districts. We will also be visiting nearby Williamsburg, the capital of the Virginia Colony from 1699 to 1780. Once the wealthiest of the American colonies, the city is home to some grand 18th-century buildings. The Capitol, Wren Building and Mary College campus are particularly notable. Following the American Revolution, many of the city's buildings fell into disrepair. In the 1920s John D Rockefeller offered to support the city's restoration, transforming Williamsburg into a national treasure and historical shrine. Day 8: Morehead City & New Bern, North Carolina Morehead City is home to Fort Macon, a five-sided fort, and the site of the Civil War Battle of Macon. Here we can explore the fort and the nature trails of Fort Macon State Park. Nearby New Bern is one of the oldest colonial towns in North Carolina. Founded in 1710, it was the state's capital until the late 18th century. Wander through the well-preserved historical districts and admire the homes, stores and other buildings that date back to the colonial period. Day 9: Charleston, South Carolina The first British settlement in South Carolina, the city of Charleston is renowned for its charming colonial and antebellum architecture, ornate old gardens and its rich yet turbulent history. Stroll through the narrow cobbled streets and explore the city's colourful past. Marvel at the college of Charleston, which was founded in 1770. Or stop in at the Old Exchange and Provost Dungeon, constructed in 1771. These buildings were also the sight of a Southern ‘Boston Tea Party' in 1773. Both George Washington and Robert E. Lee attended services at St Michael's Episcopal Church, erected in 1752. And it was at Charleston Harbor that the first rounds were fired in America's tragic civil war. Day 10: Savannah, Georgia An incredibly beautiful city, Savannah is Georgia's oldest settlement. Once an affluent cotton trading port, the city was spared from destruction during the Civil War but eventually fell into decline. Respectfully restored in the 1960s, the city now proudly showcases its long past. Explore the historic district including Owens Thomas House, considered one of the finest examples of Regency architecture in the USA. Visit the Telfair Museum of Art or simply enjoy a pleasant stroll through the city's pleasant streets and squares. Day 11: At Sea (Florida Coast) Cruise along Florida's coast enjoying the magnificent sea views. Or stop in at an informative lecture, led by one of our onboard experts. Day 12: Miami, Florida Disembark in vibrant Miami. This electric city is known for its glitzy nightlife, distinctive towering palm trees, glittering blue ocean vistas and pristine beaches. Miami is also home to a fascinating history, rich culture, and beautiful architecture. The city has palpable Caribbean and Hispanic feel thanks to the many Cubans that moved here following the rise of Fidel Castro.