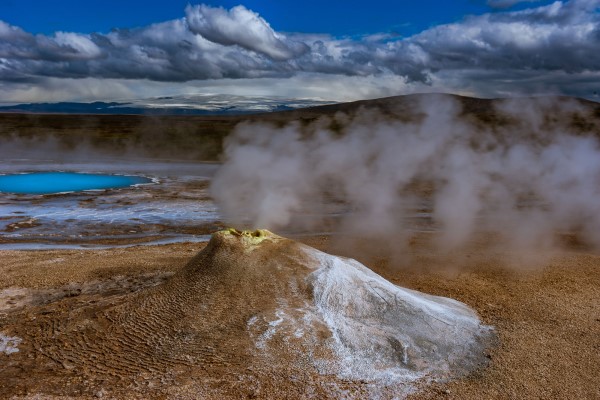 Setting sail from Ireland, this North Atlantic islands cruise takes you to Britain’s most northerly islands and Iceland. Board this 12-night cruise and discover Scottish isles from the Hebrides to the Shetlands and Orkney, before heading to the Danish outpost of the Faroe Islands, and finally on to the land of Fire and Ice - Iceland. With rugged landscapes, picturesque villages, evidence of Norse and prehistoric settlements, you will experience culture and friendly hospitality on remote islands that have been occupied since ancient times. As we cruise past highlands and islands, sit back and enjoy the unrivalled natural beauty and gaze in awe at the only crowds you are likely to see - that of nesting birds and migratory species. Your final destinations lie in Iceland – a fascinating land forged in the twin crucibles of ice and fire. 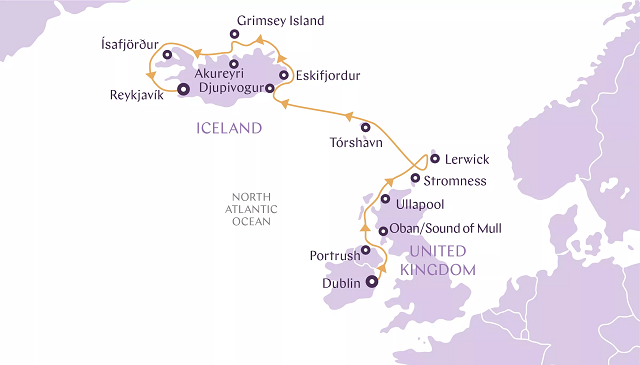 DUBLIN
DAY 1
Your cruise begins today in Dublin, the Republic of Ireland’s capital. It’s at times gritty and in places, gorgeous – Georgian squares, hidden parks and tree-lined canals. It’s lively, complex, cosmopolitan and eminently walkable. So make time to explore before you board Vega II. Visit The Long Room in the Old Library in stately Trinity College to inspect the Book of Kells. The illuminated manuscript was produced on Iona, which you’ll visit on Day 4. The Long Room itself is much lauded for its beauty – it’s a stunning, two-storey, barrel-vaulted space that houses 200,000 of Trinity’s oldest books and manuscripts. Elsewhere the new Museum of Literature Ireland, the National Museum of Ireland, Christ Church and St Patrick’s Cathedrals, the Guinness Storehouse, Kilmainham Gaol, Glasnevin Cemetery entice visitors – just be sure to stop into a snug somewhere for a pint.


PORTRUSH
DAY 2
Disembark in the small Northern Ireland town of Portrush (Port Rois), which is located in County Antrim. It’s one of the island of Ireland’s most popular staycation destinations – indeed, generations have happy memories of visiting this peninsula, with its family-friendly amusements, attractions and beaches. It is also the gateway to the UNESCO World Heritage-listed Giant’s Causeway and Causeway Coast. Flanked by the Atlantic and towering cliffs, the Giant’s Causeway is Northern Ireland’s number-one attraction. Visit and decide for yourself if the basalt formations are the handiwork of prehistoric volcanic activity – or two legendary Celtic giants.


SOUND OF MULL & PORTREE
DAY 3
One of Britain’s most beautiful stretches of water, between Mull and the Scottish mainland, cruising here is a dream with beaches, cliffs and ancient fortifications always on view. The waterway takes in distant peaks often wreathed in mist. Three lighthouses stand guard and a number of wrecks sit on the seabed. Rated one of Britain’s most beautiful villages, Portree is capital of the Isle of Skye in the Scottish Hebrides. The pastel-painted seafront houses face Loch Portree, backed by a jumble of greenery-clad hills. Pottering by the water’s edge is idyllic but serious walkers head for the Old Man of Storr. a pinnacle of rock that can be seen for miles, wild swimmers take a dip in the Fairy Pools in Glen Brittle, while enthusiasts enjoy a wee dram of Scotch whisky at Talisker Distillery.


ULLAPOOL
DAY 4
As dramatic as they come, this village on Scotland’s west coast sits on fjord-like Loch Broom, the narrow waters curling away into the distance below the misty mountains. The countryside is packed with wonders: Carrieshalloch Gorge, steep, narrow and with the roar of rushing water; Achmelvich Beach, a perfect crescent of pure white sand with turquoise waters protected by rocky outcrops; and the Bone Caves, excavations where bones of reindeer and polar bear that once roamed here have been found.


STROMNESS
DAY 5
Romantically ramshackle, the appealing grey-stone town of Stromness may not be as big as the Orkney’s capital Kirkwall, but what it lacks in size, it more than makes up for in character. The long-established seaport, with its Norse language-derived name, has changed little since the 18th century. Captain Cook’s ships stopped here in 1780 en route back from Hawaii, and Cook’s companions would have explored a place not dissimilar to today’s Stromness. Walk the narrow, flagstone-paved main street, dive down the tiny alleyways which entice you to explore further. The Stromness Museum is excellent and full of maritime tchotchke. The Pier Arts Centre and its towering collection of modern art have been described as a ‘little seaside Tate’. Just 12 kilometres north of the harbour lies extraordinary Skara Brae, one of the world’s most evocative prehistoric sites. Predating Stonehenge and the pyramids of Giza, it is northern Europe’s best-preserved Neolithic village.


LERWICK
DAY 6
Lerwick is the capital – and only real town – of the Shetland Islands, a subarctic archipelago of some 100 islands that is closer to Bergen than Inverness. The Shetlands were Viking ruled until the 15th century, and despite the Norseman ceding control, the culture remained notably Norse-tinged as can be seen at the Shetland Museum and Archives in Lerwick. More history awaits at Fort Charlotte, a five-sided artillery, and the Bod of Gremista, an 18th-century fishing booth-turned textile museum. If time allows, head for Jarlshof, an hour’s drive from Lerwick. This Iron Age broch and Norse settlement have more than 4,000 years of human activity on one site. If venturing outside of Lerwick to Jarlshof for example, be sure to keep an eye out for world-famous tiny Shetland ponies. Around 1,500 of them roam free throughout the archipelago.


THORSHAVN
DAY 7
Disembark in Tórshavn, the port capital of the Faroe Islands. Cut adrift in the Atlantic, halfway between Scotland and Iceland, the Faroes are a self-governing archipelago within the Kingdom of Denmark. Off the radar for most travellers, the Faroes are becoming increasingly well known for their scenic splendour (think New Zealand crossed with Iceland), and the unique cultural heritage. Thanks to a melange of influences, the Faroes has its own flag, saga, dances, traditions and language. Sited on the southern tip of Streymoy, the largest of the 18 islands, the lively little capital, ‘Thor’s Harbour’ will charm with its rainbow-hued clapboard warehouses, grass-roofed wooden churches and the quaint old quarter, Tinganes. You might opt to explore the twin-sited Føroya Fornminnissavn, an excellent museum; the Skansin Fort; the church of Havnar Kirkja, with its distinctive clock tower. Or the shops might tempt you, the fabulous concept store, Öström, or renowned knitwear designer Gudrun & Gudrun is an obvious choice in a place where sheep outnumber people nearly two to one.


HOFN
DAY 8
Southeast Iceland’s staging post, Höfn is a small town perched on a narrow neck of land, and an ideal base for exploring Vatnajökull National Park. The town itself is well known for its lobster catch, particularly high-value species like the Norway lobster. The town hosts an annual Lobster Festival in celebration of its reputation as Iceland’s lobster capital. Vatnajökull National Park is Europe’s largest and covers 14% of Iceland. This vast area encompasses massive ice caps, thundering waterfalls, glaciers, canyons, craters and volcanoes. The park’s Jökulsárlón Lagoon is within easy reach of Höfn and is Iceland’s deepest lake. Icebergs float on the surface of the water all year long, offering resting spots for passing seals.


SEYDISFJORDUR
DAY 9
Regarded as east Island’s cultural hub, brightly painted wooden houses line Seyðisfjörður’s port. With a lively arts scene disproportionate to its small size, Seyðisfjörður has attracted many writers and artists over the years and also hosts an annual summer arts festival. Surrounded by incredible nature, the Skálanes nature reserve is a short distance from the town. The area covered by the reserve is known for its diverse wildlife with over 47 species of bird and over 150 plant species. Reindeer are also seen here, with seals and porpoises frequently spotted along the shores.


AKUREYRI
DAY 10
In northern Iceland on Eyjafjördur, Akureyri is known for its colourful old town, heart-shaped traffic lights and woodlands. Nearby tours of Lake Mývatn, the most geologically active area in Iceland, include lava formations, hot springs, caves and rifts, boiling mud pools, volcanic craters, the roaring Godafoss waterfall and Game of Thrones locations. Puffins nest on the inhabited island of Grimsey that crosses the Arctic Circle, while Hrísey island is said to have powerful healing energies.


GRIMSEY ISLAND
DAY 11
Grímsey is a remote island located 40km off Iceland’s north coast. Many people travel here for the purpose of setting foot in the Arctic Circle, the only place in Iceland where you can do so. The island is also home to fewer than 100 people, but over one million seabirds. Birdlife thrives here thanks to the lack of egg predation (there are no rats or mice on the island) and the rich, well-stocked surrounding seas. Grímsey has one of Iceland’s largest tern nesting sites and largest puffin colonies.


ISAFJORDUR
DAY 12
Surrounded by fjords in the Westfjords region, Ísafjördur is a bustling fishing town in northwest Iceland with colourful wooden 18th- and 19th-century houses in the old town of Neskaupstadur. Ísafjördur was one of the largest fisheries in Iceland, but tourism has now taken over. Nearby is Sudavik, home to the Arctic Fox Centre. Iceland’s only mammal, the arctic fox lives on the lush tundra of Hornstrandir Nature Reserve - the northernmost peninsula in the Westfjords with two of Europe’s largest bird cliffs.


REYKJAVÍK
DAY 13
Your cruise ends in Reykjavík. Make sure there is sufficient time before you begin your journey home to explore this diminutive but dramatic capital city. Despite its small size, you won’t be short of things to see and do. To get your bearings, take the elevator to the top of Hallgrímskirkja. This church, designed by famed Icelandic architect Gudjón Samuelsson is one of the most distinctive buildings in town. When you return to earth, visit the city’s other renowned building Harpa Concert Hall, located at the heart of Reykjavík's regenerated harbour – also the home of the Maritime Museum. Speaking of cultural spaces, tour the National Museum to learn the story of Iceland from past to present. The Reykjavík Art Museum houses an impressive contemporary collection including eye-catching pieces by Erró. And, of course, just 50 kilometres outside the city lies Thingvellir National Park, the site of Iceland’s original Viking parliament.

Making her maiden voyage in April 2022, our 5 star elegant Scandi-design boutique ship offers you an intimate setting from which you will be fully immersed in all the sights and scenery of your voyage.

Our brand new ship has been designed to journey to off the beaten path destinations and remote polar regions in style and comfort. The ship incorporates a PC5 ice-strengthened hull combined with extra-large stabilisers to make your journey as smooth as possible. 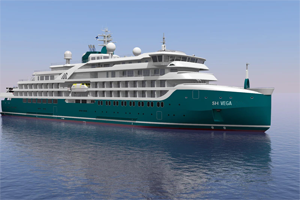