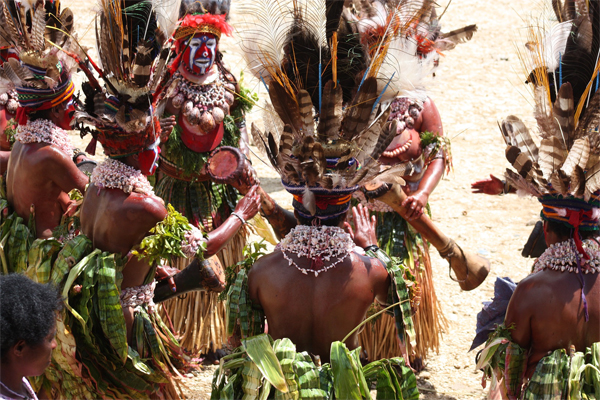 Discover the remote island nation of Papua New Guinea - or PNG, a vastly diverse country with more than 700 inidigenous languages. Our 16-day Papua New Guinea Discovery cruise takes you off-the-beaten track to visit this Southwestern Pacific destination that is known for picture-perfect beaches and kaleidoscopic coral reefs. We start on New Britain island before exploring tiny islands in the Bismarck Sea and the northern coast of New Guinea Island. Discover a world of active volcanoes with flooded caldera, tropical islands, thick rainforest and river swamplands where mystical tribes live among the varied landscapes. Diving or snorkelling in these balmy waters reveals exceptional marine life living among the reefs and wrecks of sunken WWII ships and fighter planes. Come on board our boutique expedition ship and get ready to explore a world of unimaginable natural bounty. 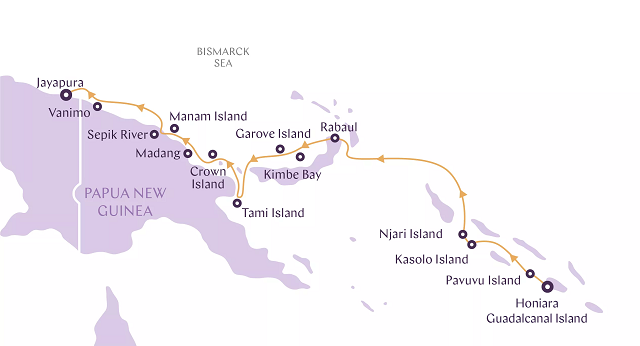 HONIARA, GUADALCANAL ISLAND
DAY 1
The capital of the Solomon Islands, Honiara sits on the northeastern coast of Guadalcanal at the mouth of the Mataniko River. A relatively new city, it grew up around a U.S. military base during and after World War II. In 1952 it superseded Tulagi as the premier city of these islands. It’s a laid-back, welcoming place whose main appeal is the tourist-free, real-life atmosphere. Military history buffs love touring the Solomon Islands, and Honiara’s U.S. War Memorial provides a comprehensive war-history lesson.


PAVUVU ISLAND
DAY 2
Step even further off the beaten track today on Pavuvu, the largest of the Russell Islands in Central Province, Solomon Islands. Located northwest of Guadalcanal, this island was once known for its coconuts, but, come 1941, coconut farming was abandoned as the Imperial Japanese Navy swept over the Solomon Islands. A Japanese garrison was established on the island. After the United States captured Guadalcanal, they were able to use the airfield to bomb out the Japanese strongholds on nearby islands, Pavuvu included. The island then served as a temporary home to the U.S. 1st Marine Division. Learn about all this and more as you delve deep into the island’s fascinating history with your expert guide.


KENNEDY (KOSOLO ISLAND) & NJARI ISLAND
DAY 3
We sail past Kennedy Island, - also called Kasolo Island and Plum Pudding Island - a tiny forested islet named after John F. Kennedy, who was involved in an incident here during World War II. In August 1943, after their craft was rammed by a Japanese destroyer, the crew of PT-109 commanded by Lieutenant Kennedy abandoned ship and swam ashore, before swimming to nearby Olasana Island. Njari is a tiny island located between the Wilson Strait and Vella Gulf in the Solomon Islands’ north region. An idyllic speck in the ocean, it’s almost entirely covered in trees. There's hardly any infrastructure to speak of so the coves and bays remain unspoiled, day trippers enjoy the seclusion, beauty, and opportunity to swim and snorkel in these beautiful waters.


RABAUL
DAY 4-5
Your destination today is the former capital of New Britain, Rabaul. Its position in Papua New Guinea’s northeastern tip is extraordinary, sited inside the flooded caldera of an enormous volcano. The town’s proximity to these volatile mountains – plus aerial bombardment during World War II – have forced Rabaul to rise from the ashes more than once. Most recently in 1994, when nearby Mount Tavurvur erupted, demolishing much of the town. Rabaul’s spirit wasn’t destroyed and thanks to its impressive harbour, buzzing markets and fascinating wartime past, it’s a genuinely interesting place to visit.


KIMBE BAY
DAY 6
This secluded volcanic bay on the island of New Britain is famed for its diverse marine ecosystem. Snorkel crystalline waters to spot coral reefs teeming with colourful tropical fish, or explore World War II wrecks and coral-capped seamounts on a diving trip. You can also venture inland to trek an active volcano, then soak in the rejuvenating thermal waters of the jungle-clad Garu Hot River. Birdwatchers will want to head to the rainforest, where Blyth’s hornbills, eclectus parrots and red-knobbed imperial pigeons flitter.


GAROVE ISLAND
DAY 7
Part of the Vitu Islands in the Bismarck Sea, tiny, far-flung Garove is defined by its rich marine biodiversity. The island wraps around a massive, horseshoe-shaped flooded caldera, where calm turquoise waters offer gentle snorkelling and diving. You can also explore nearby dive sites to spot multi-hued fish darting amongst sea fans and anemones while reef sharks, schooling jacks and barracuda patrol the deep. Back on dry land, tiny villages nestle amid towering coconut palms.


TAMI ISLANDS
DAY 8
The artists of the Tami Islands – a small archipelago of just four lush islands, located south of Finschhafen in the Huon Gulf – are some of the most prolific carvers in Morobe Province. They are famed for their intricately carved hardwood bowls. Highly polished and superbly crafted, these ‘Tami bowls’ are used as ceremonial vessels and valued highly. Examples of these bowls, which feature the face of a spirit clad in an oa balan (three-peaked headdress), can be found in the New York’s Metropolitan Museum and the British Museum. Admire these artworks on your visit, as well as the archipelago’s turquoise waters, tranquil beaches and beautiful underwater world.


CROWN ISLAND
DAY 9
Barely 5 kilometres from end to end, this miniscule volcanic island is characterised by dense rainforest. Hike rugged jungle trails, where you might glimpse birds of paradise, doves and pigeons, or kayak and snorkel sapphire waters to discover colourful coral reefs surrounding the island. Close by, Kar Kar Island is home to one of the country’s most active volcanoes, plus sprawling cocoa plantations and traditional villages dotted amongst imposing coconut palms.


MADANG
DAY 10
A laid-back port town with a village vibe, Madang offers a beguiling combination of Pacific war history and natural beauty. Discover World War II artefacts and exhibits at the Visitors and Cultural Bureau, and learn about the battles fought to capture and reclaim this strategic outpost. Or explore coral reefs swarming with marine life on a diving or snorkelling trip in the surrounding waters. Further afield, rocky hiking trails criss-cross the soaring Mount Wilhelm, leading to panoramic views.


MANAM ISLAND
DAY 11
Manam Island is dominated by an active stratovolcano, so you might still observe ash plumes spewing on your approach. Explore the island’s rugged valleys and forested crags, and discover villages and cultures in the shadow of this natural colossus. You can dive or snorkel the area’s numerous coral reefs, or head to Hansa Bay to find sunken American and Japanese ships, plus bombers and fighter planes. Hammerheads and tiger sharks have also been sighted in these waters.


SEPIK RIVER
DAY 12-13
The Sepik River meanders through dense rainforest and tangled swampland, before opening onto muddy banks dotted with tribal villages and stilt villages. Delve into traditional ways of life as you explore these homesteads, and learn about tribal ceremonies and spirit houses as you discover the stories behind the elaborately carved masks and totems. You might glimpse crocodiles, which are both feared and revered as a symbol of power amongst tribes, plus birds of paradise like Goldie’s and sicklebills, their bright plumage punctuating the landscape.


VANIMO
DAY 14
A quiet provincial capital close to the Indonesian border, Vanimo is a surfing hotspot known for its monsoon swells and reef breaks. For a more relaxing time, head to a public beach, where sandy stretches are fringed by shady trees, or hire a boat to nearby Narimuru Island for a swim in calm turquoise waters. Nearby Lido is a quaint village with grass-roofed huts and towering coconut palms, then take a coastal stroll along the headland for views of craggy limestone cliffs pounded by crashing waves.


JAYAPURA
DAY 15-16
Papua’s provincial capital, Jayapura is a base for exploring the rugged Baliem Valley. Follow winding trails through verdant highlands to discover secluded waterfalls and saltwater springs, then learn about traditional ways of life at a tribal village hidden amid the rainforest. You might even observe a religious ceremony or a mock tribal war. In Jayapura itself, museums narrate the fierce Allied and Japanese battles that took place here during World War II as troops fought to control the Pacific theatre.